Last weekend was super fun because my family came up to KL! But of course, the actual fun comes when all three sisters go out late at night for supper! Reb is a big Korean fan so every time she comes up to KL we will make it a point to try out new Korean cafe. Mostly for the bingsu, Korean ice dessert. 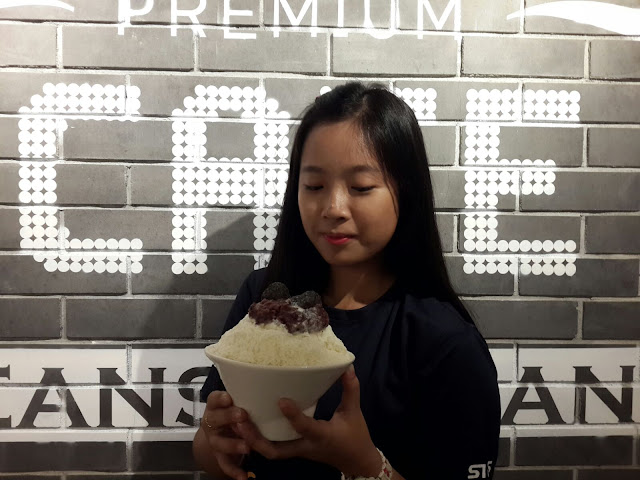 We have been to Dal Komm, Bingsu Cafe, and of course Cafe Bene who started off this Korean bingsu craze. This time, I came across this newly opened Korean cafe at Uptown Damansara on Facebook. Their official FB page was somehow on my news feed wall so off we go to try it out! 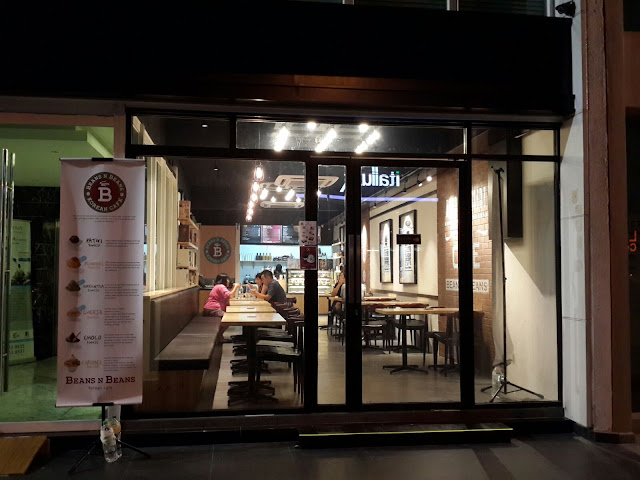 Welcome to Beans N beans, Uptown Damansara! I don't think they have their signboard up yet because they seem very very new. Step into the shop and you still can smell the newly renovated smell haha 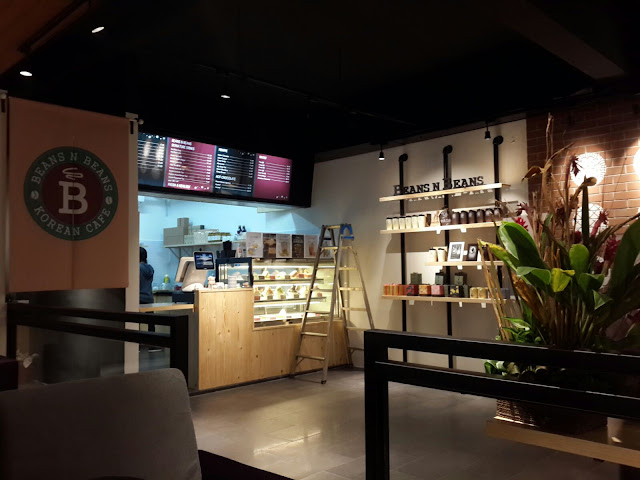 Some loose ends being tied up, prolly that explains the ladder LOL

To find Beans N Beans, they are on the same row was Wondermilk, the opposite end of Texas Chicken. We reached there about 11.30pm that day which pretty late, almost reaching their closing time but we were given first class service! Something that I have a weak spot for so I decided to jot it down in my food blog despite the very limited time I have. 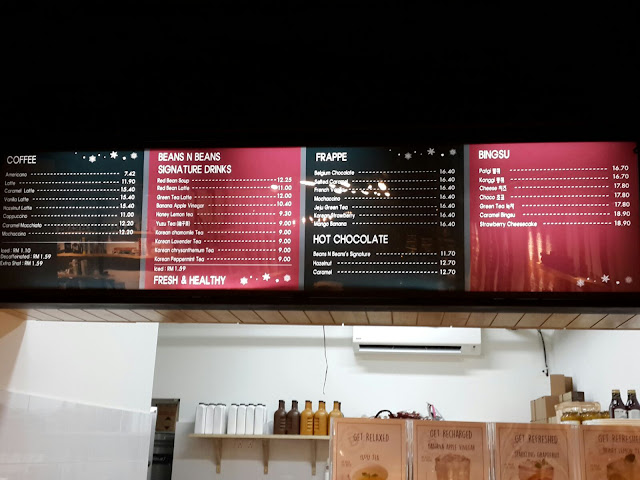 First up, their menu. Thought that readers who want to check out the price of the items they offer. They have drinks, bingsu and food as well. I wanted to try their waffle with maple syrup but that's only offered during the day for breakfast. 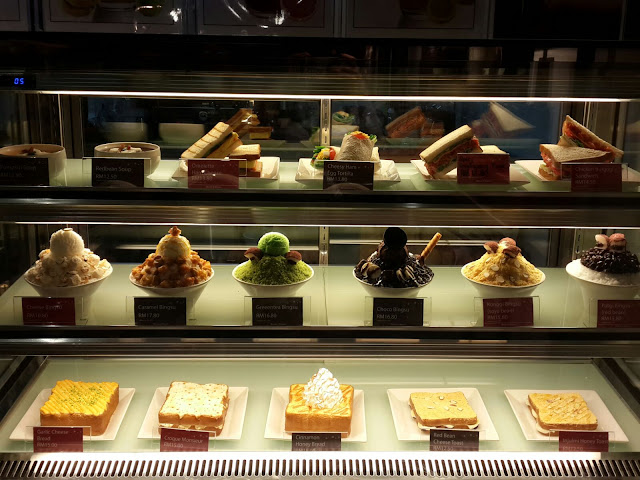 Have a look at the bingsu on display! Looks really appetising! Also, they have dessert toast as seen on the last row in the picture but we decided to just go with bingsu since we weren't too hungry. I asked the cashier which bingsu would she recommend and she told me that the green tea and the chocolate one is a favourite! Wanted to go for green tea but they were sold out. 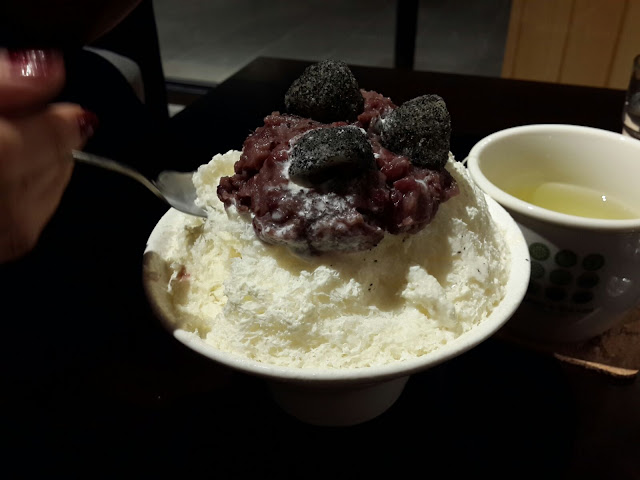 So we had Red Bean bingsu, RM15.90 because I asked for something not too sweet. Red bean bingsu was pretty good. The shaved ice was made up of milk! Love the milky taste, though subtle. A generous amount of red bean on the top with three bits of sesame glutanious rice balls which was my favourite!!! 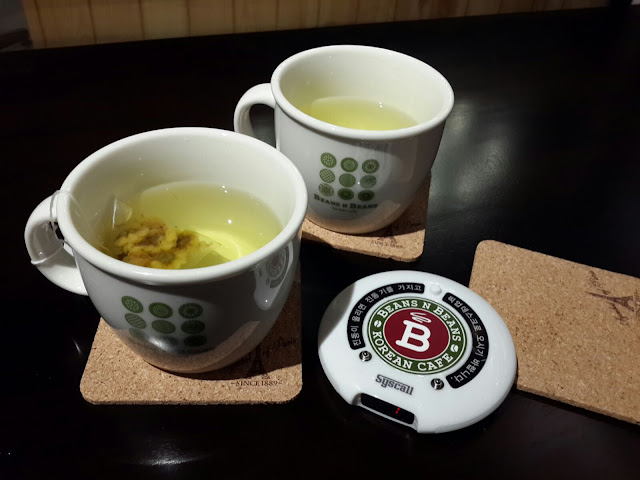 The lady boss (I assume?) was really nice to bring us free chrysanthemum tea to try. It is actually a good idea to call for something hot to drink after having your bingsu, somehow the balance makes the bingsu experience even better! But even if you don't want to order any drinks, free water on the house! 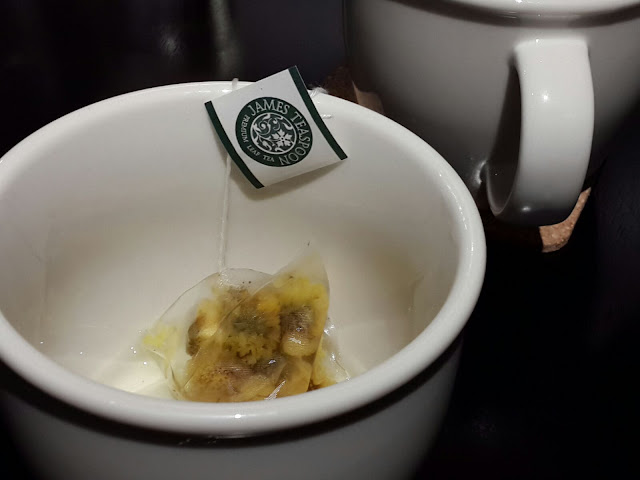 Since this chrysanthemum tea was given to us free for sampling, we had a peek at the price. OMG RM9!!! That's pretty pricey for a flower tea I think because I usually make my own tea at home- buy a packet of Chysanthemum tea for RM2.50 from the chinese medicinal shop to boil one big pot of tea. But then again, may be different flower quality? LOL That's why I took a picture of the tea bag brand. 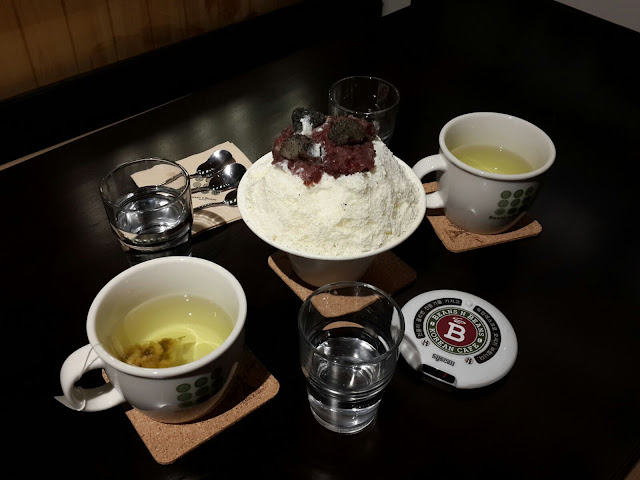 Anyway, I was impressed by the generosity of Beans N Beans even at almost midnight. Thank you for the free tea to warm our belly!

Beans N Beans is a really nice and cosy place to chill out with friends and family, during the time we were there (night time LOL). I might think twice of going there during the day because parking at Uptown Damansara during the day is just crazy. Maybe it's just me but I don't like having the stress of locating for parking and maybe having to resort to illegal parking just to hang out. So yeah, I'll most definitely return. At night. Unless... I decide that I want to try out their breakfast menu.

Since we enjoyed ourselves there, we decided to return to Beans N Beans on the following day! This time we were there earlier, around 9pm maybe? And yes! They have Green Tea bingsu this time!!! 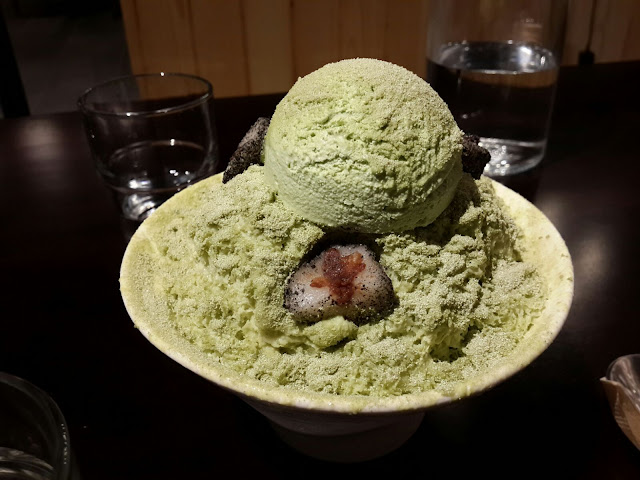 Green Tea bingsu RM17.80. OH MY GOSH, green tea bingsu was DA BOMB! All of us thought that this was definately yummier than the Red Bean one that we had the day before. And to think that we thought that the red bean one was already pretty good.

The soft shaved green tea ice topped with this very smooth green tea ice- cream served with my favoruite sesame glutanious rice balls! And what makes it even more crazily addictive is the green tea powder that they sprinkle on top of the bingsu as a finishing touch. OMG, holy cow super delicious!!!


I like that the ice was flavoured and that it was so soft and smooth. Probably not a traditional bingsu, as Beans N Beans' reminds me more of a Hong Kong ice dessert but who cares? It's so good! LOL Bingsu here at Beans N Beans has pretty subtle taste, nothing too empowering, nothing too sweet! Eat two bowls also don't feel fat! Maybe wallet becomes thinner only la lmao 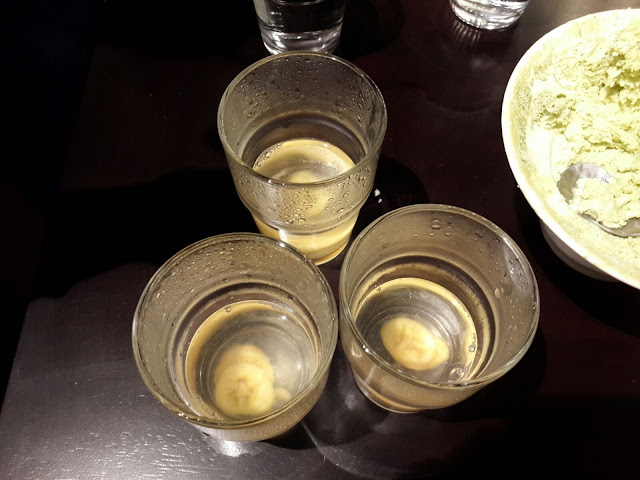 Oh ya, second time we were there the lady boss gave us a new drink to try for FREE again!!! This time it's apple cider banana drink. While Naomi can't stand the apple cider smell, hence she couldn't enjoy the drink without cringing, Reb and I totally loved it!

This apple cider banana drink is priced at RM10.90 if Im not mistaken and I would fork out that money willingly because this drink gave me such a surprise!

When it was served to us hot, all you could smell was apple cider vinegar. For those who haven't smelt that before, well it smells like rotten apples. Look inside and you can see sliced banana at the bottom of the glass. The thought of banana in hot water can be scary I know LOL But when you take a sip, it will blow your mind!

Thank you Beans N Beans for the very welcoming service! I'm leaving you with some pictures of the interior of the cafe. Have a good week ahead! 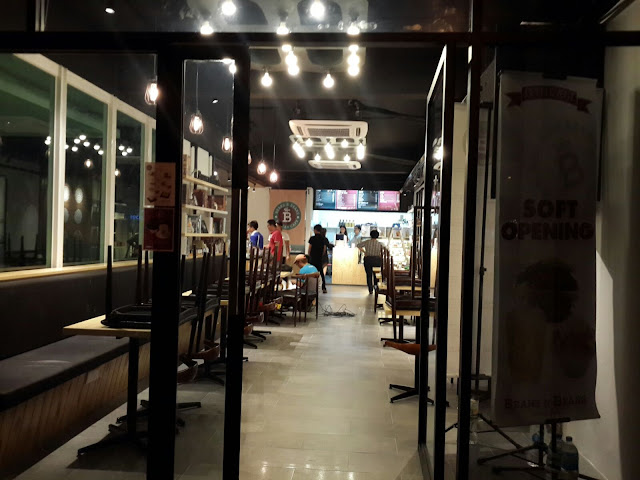 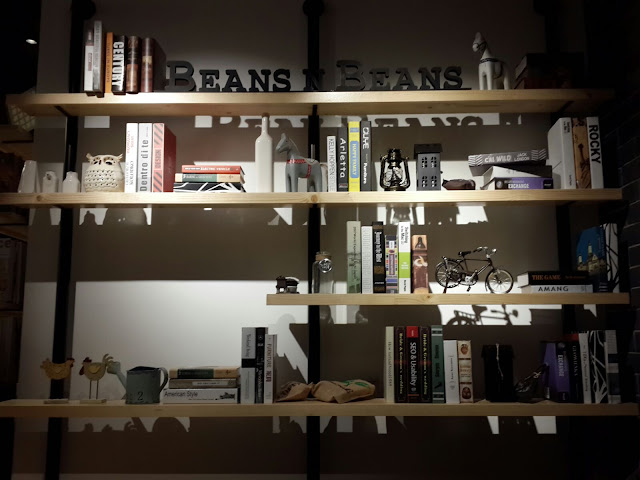 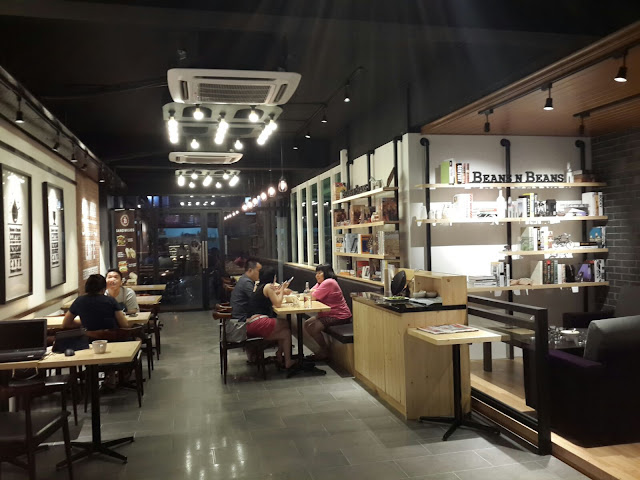 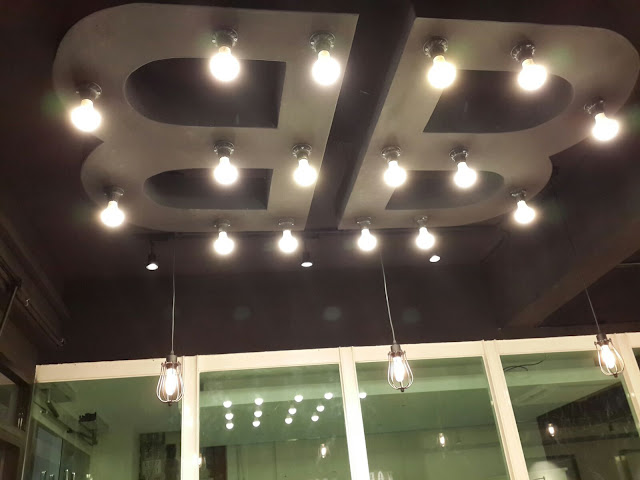 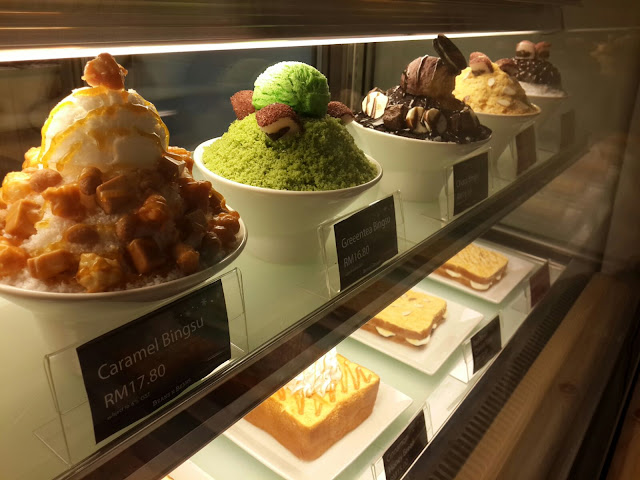 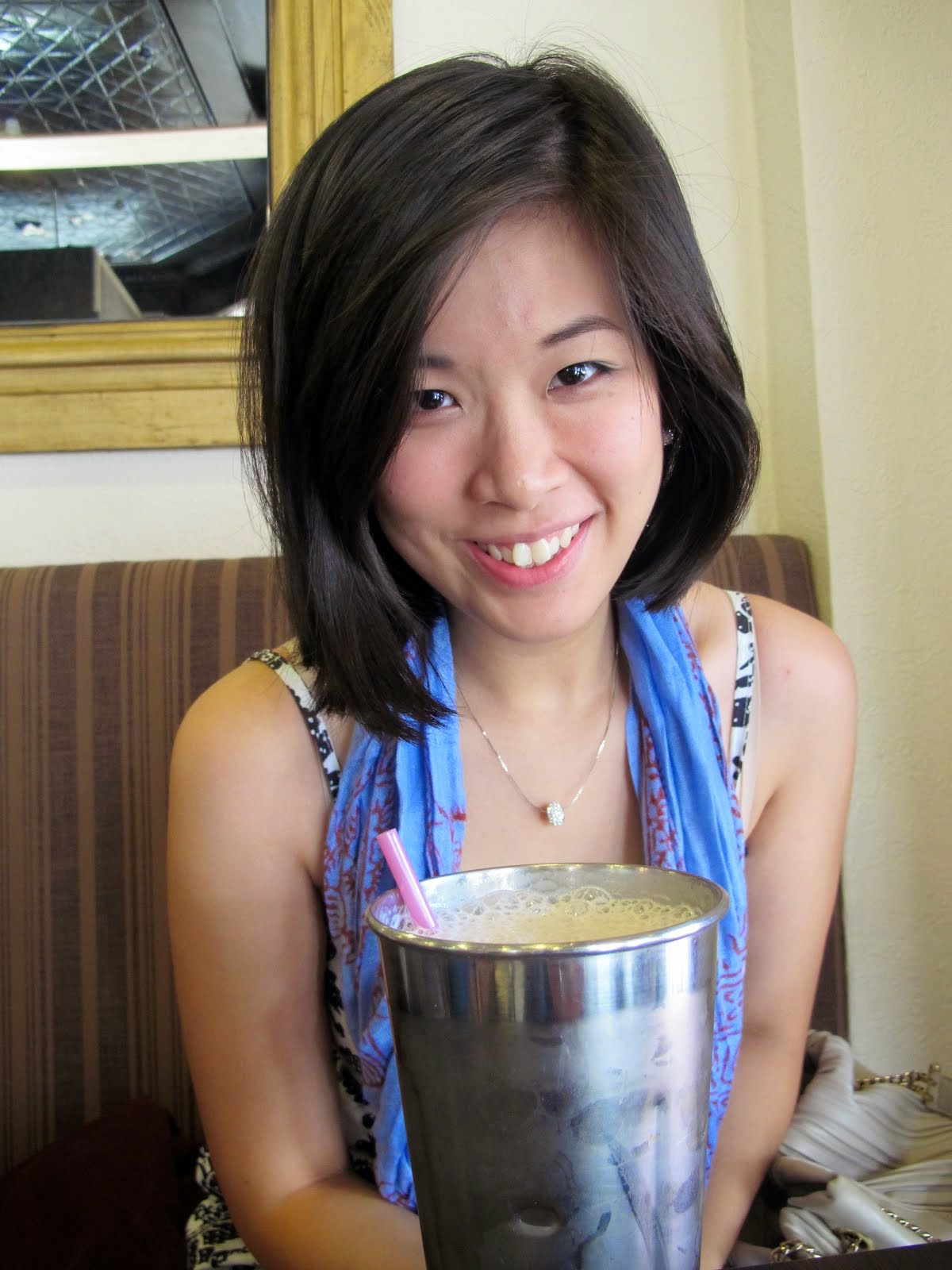